An algebraic fraction is a fraction which contains letters.

The Parts of an Algebraic Fraction

An algebraic fraction consists of a numerator and a denominator.

The slider below shows more about algebraic fractions. Open the slider in a new tab

"Algebraic" means relating to algebra. It is pronounced 'al-je-bray-ic'. "Fraction" comes from the Latin "fractus", meaning "broken". This is because the whole is 'broken' into parts.

A Fraction Is a Division

A fraction is a division. The numerator is divided by the denominator. 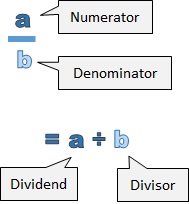