An average is a single value that is typical for a set of values. The most common type of average is the mean, but we can also use the median and the mode.

The Merriam-Webster dictionary defines an average as "a single value (such as a mean, mode, or median) that summarizes or represents the general significance of a set of unequal values."

An Intuitive Idea of an Average

People are of different heights. Some are very short, some are very tall. We all have an idea of a typical, or average, height. 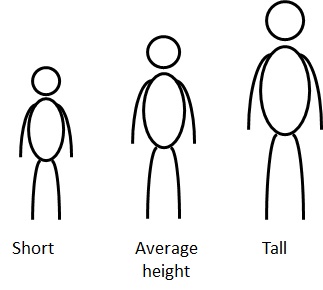 It is the height we expect most people to be. It is a representative height. We can measure heights and give numbers to them (for example, 5 feet 9 inches, or 175 centimetres). The average height will then also have a number. We can find averages of numbers.

Why Is an Average Useful?

There are a lot of differences in the things we choose to measure. People have many different heights or ages or incomes or test scores. Averages are useful because they can summarize all this data into a single number, which can represent all the data. Rather than recording the height of every adult in a country, it is useful to know (and easier to learn) that the average height is 5 feet 9 inches, or 175 cm.

An Average as a Measure of Location or Central Tendency

A more technical description of an average is a measure of location or a measure of central tendency. Imagine a line which represents height, going from short heights on the left to tall heights further on the right. Also imagine we ordered people by height along this line:

This is a good illustration of using statistics to summarize data. The average gives you a 'measure of location' - where most of the numbers are bunched around. Note: The other useful summary is a 'measure of spread': how much the numbers spread around the average. Are they all close to the average, or or some much smaller or larger?

There are 3 different types of average.

The mean (arithmetic mean) is the most common type of average. The mean is found by adding all the numbers together and dividing by how many numbers there are. The mean of 1, 2 and 3 is found by dividing the sum of the numbers by a count of the numbers:
Mean = (1 + 2 + 3) ÷ 3 Mean = 6 ÷ 3 Mean = 2
It is as if you've taking the total and spread it equally among each number. If one person had £1, another £2 and a third £3, the mean (£2) is what each person would have if it was shared equally among the three.

The median is the 'middle' number of a set, when the numbers are listed in numerical order. The median of 1, 2 and 3 is the middle number, when they are ordered from smallest to largest:
1 2 3 Median = 2

The slider below gives more information about averages. Open the slider in a new tab

What's in a Name

The word average has a complex history. The root comes from the Arabic 'awar', which means damage to goods. This entered into Italian as 'avaria' and French as 'avarie', meaning damage to a ship or cargo. In English, the '-age' from 'damage' was added to this root to make 'average'. If you're wondering what this has to do with averages... it will become clear. When goods transported by sea were lost or damaged, the loss had to be shared by the owner of the ship and the owner of the cargo. It had to be 'averaged' between the two.

Which Average to Use?

When most people talk of averages, they are really talking of the mean. Imagine 3 people each had a different amount of money:

Median = 5 10 150 Median = $15
The mean has changed from $10 to $40, but the median is unchanged at $10. The mean can be changed by a single number that is much bigger or much smaller than the others (called an outlier), whereas the median does not change so much. Therefore the median can give a better idea of a 'middle' value when there are outliers. If you were finding the average income, the mean income will be dragged up by a few millionaires and billionaires. The median income will give a better idea of a middle class income.

Use this interactive widget to see the mean, median, and mode averages of your data set.