An event is dependent if its probability is affected by whether or not another event has occured.

A Real Example of a Dependent Event

It is easier to understand a dependent event with an example. 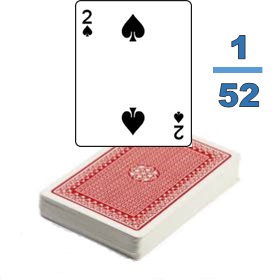 Picking coloured marbles from a bag, without replacing them, gives another example of dependent events. The slider below shows how the probabilities of picking a certain colored marble changes depending on whether that color has been picked before. Open the slider in a new tab

Probability depends on the number of ways an outcome can occur and how many outcomes there are for an event. For example, when tossing a coin, there is always 1 way a Heads can come up and 2 outcomes (Heads and Tails). These don't change no matter how many times a coin is tossed. Now consider picking the Ace of Spades from a pack of cards, without replacing it. In the 1st pick, there are 52 possible outcomes (one for each card). In the 2nd pick, one card has been removed... ...so the number of possible outcomes has changed... ...so the probability has changed... ...so the event is dependent.