An exponent tells you how many times a number (or other quantity) is multiplied by itself.

The Oxford English Dictionary defines an exponent as "a symbol denoting the number of times a particular quantity is to be taken as a factor to produce the power indicated."

It is easier to understand exponents with an example. Imagine we wanted to multiply 3 by itself 2 times. We would write 3 with a small 2 written to the right and above it: 32. 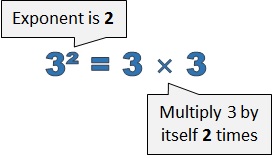 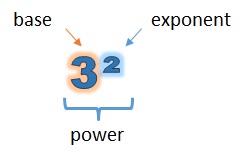 Real Examples of an Exponent

Some real examples of exponents are given below.

Exponents can also be a negative number. A negative exponent tells you how many times to divide 1 by the number. For example, 3−2 means divide 1 by 3, 2 times:

An exponent can be a fraction. A fractional exponent means finding a root of a number. For example, 3½ means the square root of 3:

An exponent can also be called a power or an index (plural indices).

The Laws of Exponents

There are several laws of exponents, which are very useful in algebra. We use these laws when we are multiplying and dividing bases with exponents. They also help us understand negative and fractional exponents.
Read more about the laws of exponents

If a number or a letter does not have an exponent, imagine it has an invisible exponent of 1:

What is a power? What is a base? The laws of exponents