Here are some examples of improper fractions:

A useful way of visualizing fractions is to picture it as a cake being cut into equal parts. The top number (the numerator) tells you have many slices you have. The bottom number (the denominator) tells you how many equal slices the cake is cut into. For improper fractions, there are enough slices to make at least one whole cake, and there may be more slices to spare: 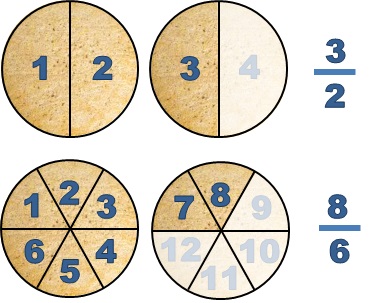 Here is an interactive widget to help you learn about the types of fractions.

Improper fractions are sometimes called "top-heavy" fractions because the top of the fraction is bigger than the bottom.

What Is a Fraction?

A fraction is a part of a whole number. Fractions consist of a numerator and a denominator. There are three different types of fractions:

The Size of Improper Fractions

An improper fraction is always greater than or equal to 1.