A polygon is a 2-dimensional shape with straight sides.

The Oxford English Dictionary defines a polygon as "a plane figure with many (usually more than four) straight sides and the same number of angles."

The slider below shows more about polygons. Open the slider in a new tab

Regular polygons have sides of equal length and equal angles.

Irregular polygons have sides of different lengths and different angles.

Polygon comes from the Greek 'poly-', meaning "many", and '-gon', meaning "angle". Therefore 'polygon' means "many angles" as each polygon has several angles inside of it.

The angles between the sides in a polygon, inside the shape, are called interior angles.

There is a formula for the sum of the interior angles of a polygon:

The angles between the sides in a polygon, outside the shape, are called exterior angles. 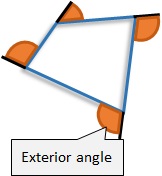 The exterior angles always add up to 360°.

What is a triangle? What is a square?