Algebra is using letters (or other symbols) to represent an unknown number. An equation that uses algebra is called an algebraic equation (note that algebraic is the adjective for algebra).

What Is an Algebraic Equation that Contains Addition?

In the equation above, the x represents a number. In words, the equation means "x plus 4 equals 8". To solve the equation, we have to find the number that, when you add 4 to it, equals 8.

How to Solve This Equation

Question: What is the value of x in the equation below?

The key to solving an algebraic equation is to isolate the letter (or symbol) you are trying to find the value of. This is done by rearranging the equation so that you just have x on the left-hand side of the equals sign, and the answer on the right-hand side. In mathematics, you want to rearrange:

So you just have x on the left-hand side of the equals sign, and the answer on the right-hand side:

The key to re-arranging an algebraic equation is:
Whatever you do to one side of an equation, you must do to the other side!

Look at what has been done to the x.

Find the opposite thing to get x on its own. The opposite to addition is subtraction, as shown in the table of opposites below:

Do this to both sides of the equals sign.

This is the solution:

This slider gives another example of solving an algebraic equation that contains addition. Open the slider in a new tab

The Golden Rule of Algebra

The golden rule of algebra is: Whatever you do to one side of an equation, you must do to the other side! Think of a pair of scales. The equals signs means that both sides of the scales balance: 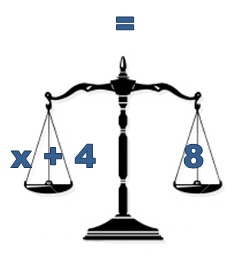 If you do anything to just one side, the scales no longer balance and the equality no longer holds: 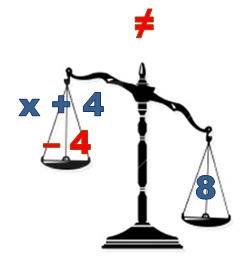 If you do the same thing to both sides, the scales return to balance, and the equality holds once again: 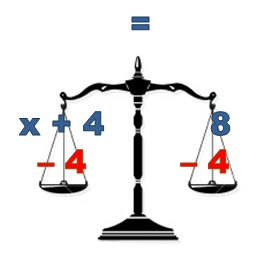 Compare two of the steps in the step-by-step solution given on this page:

You can think of this of as 'switching sides, switching signs'. The 4 has moved from the left hand side to the right hand side of the equals sign; and has changed to having a + to a - in front of it. This can be done to any term that is an addition or a subtraction.