Division is splitting into equal parts or groups. 12 apples divided into 4 means splitting the 12 apples into 4 equal groups. Each group is then 3 apples: 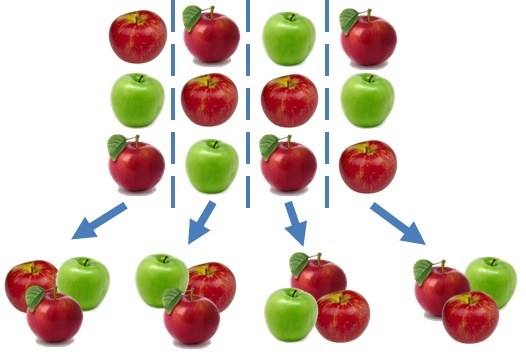 The method used to divide numbers will differ depending on the difficulty of the division. Dividing short numbers is easier than dividing long numbers together.

How to Divide Short Numbers

It is relatively easy to divide short numbers. Children may learn division by sharing out objects into equal groups and counting the number in each group. Another method is to use a number line. Division then appears as scaling a number. If 6 is represented by an arrow from 0 to 6, dividing by 3 is equivalent to scaling, or shrinking, the arrow to being 3 times as short:

Once times tables have been committed to memory, division can be done mentally. To divide 12 by 3, count up to 12 in 3s:

Long division is used to divide longer numbers. Question: What is 84 ÷ 6? 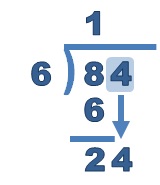 This slider below shows another example of how to divide: Open the slider in a new tab

Division As the Opposite of Multiplication

Division is the opposite, or inverse, of multiplication. If:

If two factors multiply to a product, then the product divides by one factor to the other factor.

Division doesn't always work out perfectly. Numbers do not always divide into equal groups. For example, what is:

Think about sharing 7 apples out into 2 equal groups:

Looking above, it can be seen that it is not possible to split the apples into 2 equal groups. 2 groups of 3 apples can be made, with 1 apple left over:

The r stands for remainder. 3 is the whole number answer (which is asked for in the long division to the left), and 1 is the remainder.

In the long division done on the left, there is no remainder - 6 goes into 84 exactly 14 times. This can be seen in the last step, when 6 divided into 24 exactly, with no remainder. What would happen, if instead of 84 ÷ 6, the division is

The early steps would be the same. The difference would come when the next digit of the dividend is brought down. In this case 5 would be bought down instead of 4: 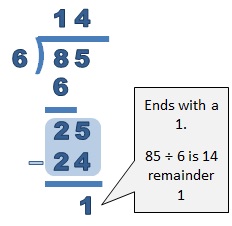