Subtraction is the taking away of one number (or object) from another to make a difference. For example, 5 apples take away 3 apples makes 2 apples:

The method used to subtract numbers will differ depending on the difficulty of the subtraction. Subtracting short numbers from each other is easier than subtracting long numbers together.

How to Subtract Short Numbers From Each Other

It is easy to subtract short numbers. Children learn to put a certain number of fingers up, then put some of them down to see how many are left. They may do the same with other objects. A number line can be used to subtract. For example, 5 - 3 can be performed on a number line: 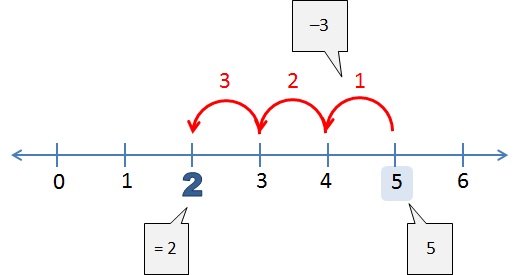 How to Subtract Long Numbers From Each Other

It is more difficult to subtract long numbers from each other. For example:

This sum is made easier when we notice numbers are made of hundreds, tens and units (i.e. the place value of the digits in the number). 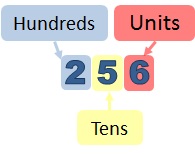 Each part - the hundreds (in blue), the tens (in yellow) and the units (in red) - can then be subtracted from each other:

These 3 parts can then be added to give the answer:

The solution to 256 - 124 is 132. This method of breaking numbers down into hundreds, tens and units is the basis for long subtraction, which offers a more systematic way of doing subtraction.

How to Do Long Subtraction 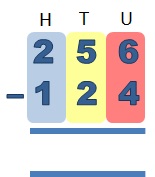 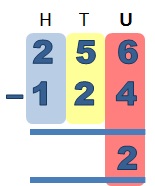 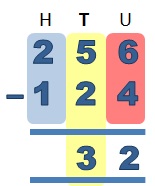 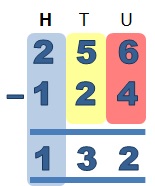 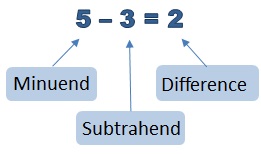 Line Up the Columns! When doing long subtraction, ensure you align the numbers in the correct columns, so the units are all in the units column etc. For example, the following would be incorrect. The units of 11 (1) is underneath the tens of 325 (2):

When subtracting numbers in a column, sometimes the number you are taking away from is smaller than the number being taken away:

5 is less than 7, we should get -2. But that doesn't make any sense here. To do long subtraction correctly, we need to borrow a 1 from the top number in the column to the left.