A Real Example of an Enlargement

In this example, the shape has been enlarged with a center of enlargement (shown as a red cross) at the origin. 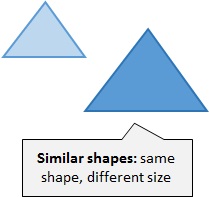 ...But Not Congruent Shapes

Congruent shapes are the same shape and the same size. 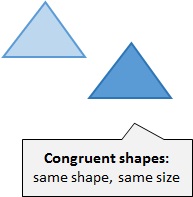 If a shape has only been translated, reflected or rotated (or some combination of all three) then the shape is congruent.

What is geometry? What are transformations?