A power with a negative exponent is equal to the reciprocal of the power (1 over the power) with the exponent made positive. Imagine we have the letter a with an exponent of −n. We put the whole power under 1 and remove the minus sign from the exponent. This is equal to 1⁄an.

This is a laws of exponents.

How to Find Negative Exponents in Algebra

Use the law of exponents to find the power with the negative exponent below.

Write 1 on top of a fraction (called the numerator).

Write the power from the question on the bottom of the fraction (called the denominator).

We have found the negative exponent.

Let us look at the rule for negative exponents in algebra: 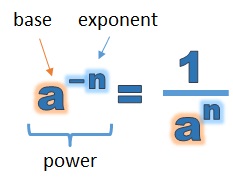 The slider below shows another real example of how to find negative exponents. Open the slider in a new tab

What Is an Exponent?

What Is a Reciprocal?

A reciprocal of a quantity (such as a letter or power) is 1 divided by the quantity. 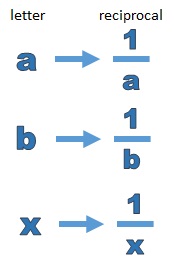 What if there is a number or other letter written in front of a power with a negative exponent?

The number or letter in front is a coefficient that is multiplying what comes after it. It goes on top of the fraction instead of 1.