A frequency table is a great way to present a lot of data. Imagine a teacher wanted an easy way to present the test scores of their mathematics class: 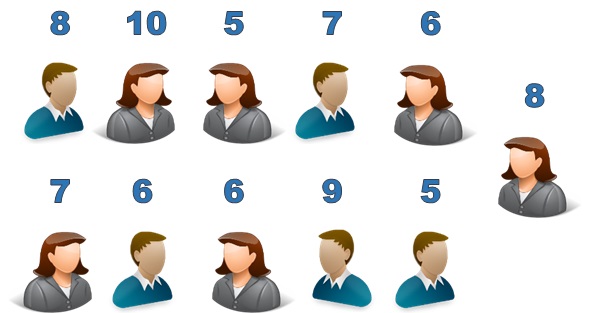 How to Make a Frequency Table

Making a frequency table is easy.

Construct a frequency table for the numbers below.

Construct a table with three columns: 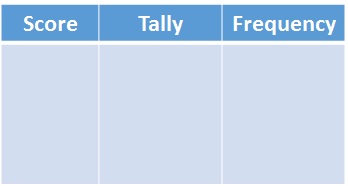 In the Score column, write each number that appears in the set of numbers down the column, from the smallest to largest. 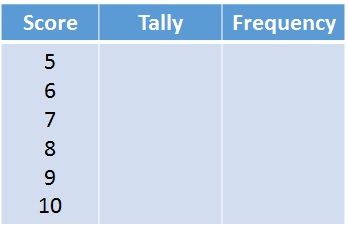 Go through the set of numbers in the Question. For each number, cross it out and put a tally mark in the Tally column, in the row for that number.

For each row, count the tally marks. Write the number of tally marks in the Frequency column.

We have made the frequency table for the set of numbers given in the question. 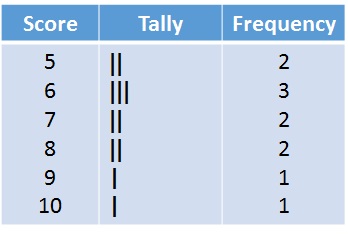 The slider below gives another example of making a frequency table. Open the slider in a new tab

What Are Tally Marks?

Tally marks are a way of helping you to count, especially when you have to count a large set of numbers. A vertical line is made for the first four numbers:

To make five, a diagonal bar is drawn across the four vertical lines:

Once ten is reached, two groups of five tally marks are used:

Finally, it is easy to count the total number of tally marks. For example, consider the tally marks below:

Count up the groups of five tally marks in fives:

There are 22 tally marks.

When there are a large number of numbers to put into a frequency table, it is easy to go wrong counting them. Crossing the numbers off as you enter them into the Tally column is one way of ensuring you check each number once only. Another useful check is to add all the numbers in the Frequency column. They should sum to the number of numbers there were to begin with. For example, if there are six numbers:

You obtain the following frequency table:

Summing up the frequency column gives:
2 + 3 + 2 = 7
This is not equal to the six numbers. This tells you that a mistake has been made. (In the example above, there is only one 3, not two). Try to find the mistake or repeat the exercise.

In the test scores example, the numbers have been counted one at a time going from left to right. This is not the only way to do it. You could: Find the way you find best to count the numbers without making mistakes. Feel free to try different ways until you find the one that suits you best.
Help Us To Improve Mathematics Monster
Please tell us using this form.

What is a frequency table?