A number line is line where every point corresponds to a number.

The numbers are evenly spaced. Numbers get larger as you move right and smaller as you move left along the line. The number line can go on left and right forever.

The Oxford English Dictionary defines a number line as "a graduated line representing the ordered set of real numbers (sometimes only the set of integers or natural numbers), used especially to illustrate simple numerical concepts and operations."

Numbers on a Number Line

Numbers can be found on a number line.

This means that: For example,

The Direction of the Number Line

We have drawn the number line horizontally:

A number line could be drawn vertically: 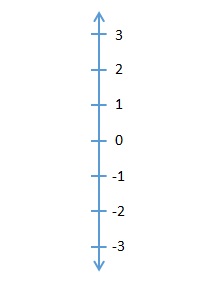