The Merriam-Webster dictionary defines the sine function as "the trigonometric function that for an acute angle is the ratio between the leg opposite the angle when it is considered part of a right triangle and the hypotenuse."
The sine of an angle is given by the formula below:

A Real Example of the Sine Function

It is easier to understand the sine function with an example.

The Graph of the Sine Function

The sine function can be plotted on a graph. 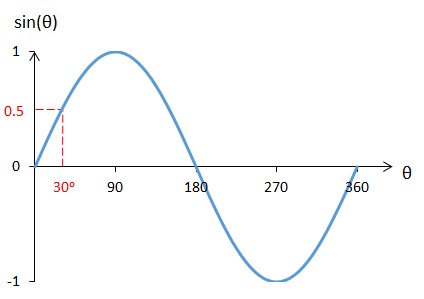 Find the angle along the horizontal axis, then go up until you reach the sine graph. Go across and read the value of sin θ from the vertical axis. We can see from the graph above that sin 30° = 0.5.

The Sine Function and the Unit Circle

The sine function can be related to a unit circle, which is a circle with a radius of 1 that is centered at the origin in the Cartesian coordinate system. 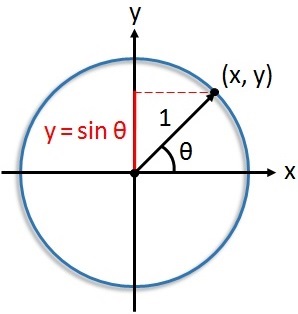 For a point at any angle θ, sin θ is given by the y-coordinate of the point.

The slider below gives more information about the sine function. Open the slider in a new tab

Here is an interactive widget to help you learn about the sine function on a right triangle.

The sine function is a function in trigonometry (called a trigonometric function). The word trigonometry comes from the Greek words 'trigonon' ("triangle") and 'metron' ("measure"). Trigonometry is the branch of mathematics that studies the relationships between the sides and the angles of right triangles. When an angle is defined in a right triangle, the three sides can be defined. 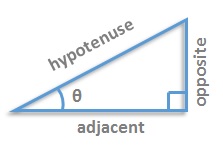 The sine function is only one of the trigonometric functions:

The Sine Function and the Unit Circle

The sine function can be related to the unit circle. Consider a point on the unit circle (x, y). It can be joined to the center by a radius of length 1. A right triangle can be formed under the radius. 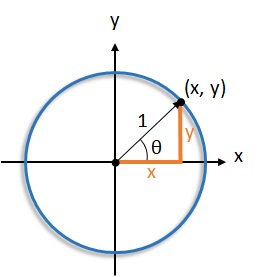 The hypotenuse is the radius of 1, the adjacent side has length x and the opposite side length y.
opposite = sin θ × hypotenuse y = sin θ × 1 y = sin θ

Use this interactive widget to create a right-angled triangle and then use the sine function to calculate the hidden element. Start by selecting which element you want to hide (using the green buttons) and then clicking in the shaded area.

Hide
Help Us To Improve Mathematics Monster
Please tell us using this form.