There are different types of triangles. Triangles can be classified by:

Type of Triangle by Lengths of Sides

Equilateral Triangles Equilateral triangles have 3 equal side lengths and angles.

Isosceles Triangles Isosceles triangles have 2 equal side lengths and angles.

Scalene Triangles Scalene triangles have 0 equal side lengths and angles.

Interactive Game on the Types of Triangle

Here is an interactive game to help you learn about the types of triangle.

Type of Triangle by Angles

Acute Triangles Acute triangles have all acute angles (less than 90°).

Obtuse Triangles Obtuse triangles have one angle that is obtuse (more than 90°, less than 180°).

Triangles can be classified by both lengths of sides and by angles. This means a triangle can be both acute and isosceles, or obtuse and scalene. The slider below shows more real examples of the types of triangles. Open the slider in a new tab

Here is an interactive widget to help you learn about the types of triangles.

What Is a Triangle?

A triangle is a 2-dimensional shape with three sides and three angles. 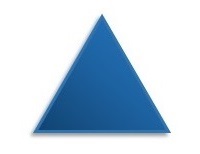 If a triangle has sides of equal length, the equal sides are indicated by drawing a short line through the sides: 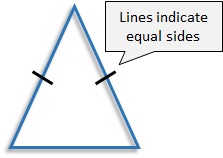 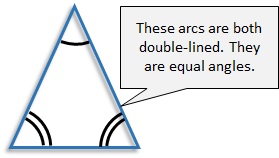 The Interior Angles of a Triangle

The angles between the sides, that are inside the triangle, are called interior angles.

The interior angles of the triangle determine whether a triangle is acute, obtuse or right.